Wilson Cruz has specific evidence of how far TV has come in its depiction of LGBTQ characters since his groundbreaking portrayal of a gay teen in the memorable 1990s series, “My So-Called Life.” He sees a kinship between his Rickie Vasquez and the lead character of Hulu’s “Love, Victor.”

“People ask me all the time, when was the first time I saw myself on television? And I always say, ‘When I saw myself on television.’ … I understood how much I wanted and needed to see myself and my lived experience represented in some way,” Cruz said during “LGBTQ Characters on Television – What’s Next?,” a virtual Comic-Con@Home discussion that also featured actors Tatiana Maslany and Anthony Rapp.

Cruz, who stars alongside Rapp in CBS All Access’ “Star Trek: Discovery,” recognizes the honor and responsibility that comes with being “a first” and a role model for young LGBTQ people of color with his turn on “My So-Called Life.”

But he’s pleased that there are more roles that cover a broader range of experiences now. 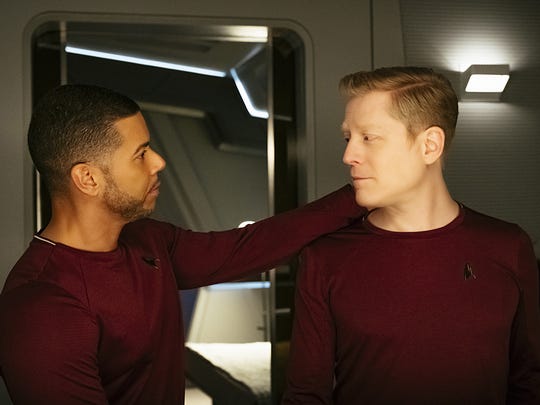 “What’s exciting to me about where we are now is the fact that we have something like ‘Love, Victor,’ which takes Rickie and expands on that story in a lot of ways,” Cruz says of the coming-of-age comedy that focuses on a gay teen, newly arrived in Atlanta, who’s coming to terms with his sexuality as he navigates high school.

“That show looks at a queer Puerto Rican boy and his family and how he navigates that,” he continued. “And it’s incredibly moving and fresh on my mind because I spent the whole night bingeing the entire series in a bucket of my own tears.”

Maslany, who won an Emmy for her portrayal of several clone characters on “Orphan,” realized how important the clone Cosima was to fans when she attended Comic-Con in San Diego after the first season.

“Being able to go to Comic-Con and connect to fans who were finally seeing themselves on screen in Cosima and able to speak to their parents about who they are because Cosima allowed them to have an example … was really eye-opening to me,” said Maslany, who now stars in HBO’s “Perry Mason.”

Returning to set for Season 2, she said, “We felt this immense pride and responsibility and protectiveness over the LGBTQ community and our Clone Club, who were majority LGBTQ.”

The actors acknowledged substantial progress since the pre-“Will & Grace” days of Rickie Vasquez, but said much work remains to be done.

Rapp suggested more stories focusing on non-binary characters and LGBTQ characters of color and Smith hopes for “more queer representation in fantasy and action movies (and) not just the sidekick. I want them to be the lead.”

Greater representation must take place off screen, too, Cruz said. “We have to have more LGBTQ (people), especially trans people behind the camera – producers, directors, writers. That’s how we’re going to see more diversity.”

Clayton, known for portraying the trans woman Nomi in “Sense8,” would like to have the same opportunities as cisgender actors.

“It’s always been my goal to be given the same opportunities that any cisgender actor and actor who identifies as cisgender is given. I want to be able to audition for all kinds of roles,” Clayton said. “For so long, actors who identified as trans, we have only been allowed to audition for parts that are trans. … I want to see non-binary and trans- identified people playing all kinds of characters and not just (be) there to talk about their gender or their transition or their surgeries.”

Which “Atypical” Character Are You Most Like? back to top Sahred From Source link TV and Movies

Can You Name All 14 Disney Live-Action Remakes?