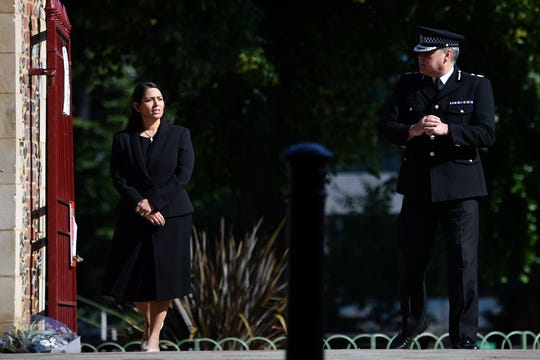 LONDON – An American man who had been living in the United Kingdom for 15 years was among three people stabbed to death in a park in the English town of Reading over the weekend that is being treated by British police as a terror attack, the U.S. ambassador to Britain confirmed Monday.

“Our thoughts are with all those affected,” Ambassador Woody Johnson said in a statement. “We condemn the attack absolutely and have offered our assistance to British law enforcement.”

Johnson did not name the American who was killed in the June 20 attack. The Philadelphia Inquirer identified him as Joe Ritchie-Bennett, 39.

His father, Robert Ritchie, told the newspaper his son worked for a law firm in London before taking a job about 10 years ago at a Dutch pharmaceutical company that had its British headquarters in Reading.

A 25-year-old man who is believed to be the lone attacker is in custody, but officials said the motive for the carnage was unclear. Security sources told the BBC that the suspect is thought to be a Libyan national who was on a terror watchlist over concerns he may have tried to join a terror group overseas. He was not deemed a major threat.

Three other people were seriously wounded in the stabbing attack Saturday evening in Forbury Gardens park in Reading, a town of 200,000 people 40 miles west of London. Britain’s official terrorism threat level remains at “substantial,” in the middle of a five-level threat classification.

The assault was at least the fourth terror attack in the Britain in the past six months.  Witnesses said the suspect shouted unintelligible words before the attack.

Two other victims were identified: James Furlong, 36, a history teacher, and David Wails, a scientist at a chemicals company.

Sophie McEwan, a former pupil of Furlong’s, described him on social media as “an inspirational teacher (who) genuinely cared for all his students.”

Another explanation, though, might simply be testing — or the lack of it. India has performed far fewer coronavirus tests per capita than many other countries have. Either way, the Indian authorities keep coming up […]

The Australia Letter is a weekly newsletter from our Australia bureau. Sign up to get it by email. When we moved from Los Angeles to Australia in 2017, one of the first things my then-14-year-old […]

Images from an empty St. Peter’s Square during a prayer on Friday paint a …

Because there is still beauty in the world. View Entire Post › Sahred Fro…

When Nigeria’s president made a rare, televised address to the nation on Thursda…