The Brothers Gage auditioned in March before ‘America’s Got Talent’ judges, but not a cheering audience, as the show adjusts to the COVID-19 pandemic.

Spoiler alert! This story contains details from the June 30 episode of “America’s Got Talent.”

The sixth day of auditions, which was taped in March, marked the first episode of Season 15 impacted by the COVID-19 pandemic, before countrywide lockdown orders sidelined entertainment production.

“I had a nightmare that I would be 90 years old doing this show and nobody would be watching it,” judge Simon Cowell said while looking back to the empty Pasadena Civic Auditorium. “And here we are.”

Aside from crew members and host Terry Crews, that meant there were only four people in the audience Tuesday: Cowell, Sofía Vergara, Howie Mandel and guest judge Eric Stonestreet, who filled in for a sick Heidi Klum.

“This is what an audition is actually like,” Cowell said. “This is going to be much harder for them.”

Although the audience was missing, the talent was not.

Exclusive: How ‘AGT’ is reshaping season during COVID-19, from no audiences to outdoor Judge Cuts 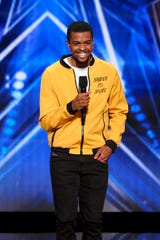 Brandon Leake is the first spoken-word performer ever to appear on “America’s Got Talent.” (Photo: NBC, Trae Patton/NBC)

Brandon Leake, a 27-year-old college counselor from Stockton, California, shocked the judges with an emotionally poetic spoken-word performance, a first on the “AGT” stage.

“Tonight’s poem is actually an ode to my sister. … She’s here with me now,” Leake said, leading Mandel to ask if she was backstage. “Kind of,” Leake replied.

Leake proceeded to vocalize the painful process of mourning and accepting the death of his younger sister, Danielle Marie Gibson, who died in 1997, the same year Vergara lost her brother. Gibson was only 8 months old.

“My brother passed away the same year that your sister passed away,” an emotional Vergara said. “I can feel your pain. I know what this is. I know what it is to have somebody taken from you without you knowing, but it was very beautiful for me.”

“It’s amazing to me that on Season 15 it’s the first time we’re hearing … spoken word,” the comedian said. “There was something more, so raw. It’s like singing and talking and just being a human a cappella. No music, no nothing. Just a raw heart beating in front of us. We feel your pain. We feel your love and you moved me to do this.”

Mandel hit the Golden Buzzer as just five pairs of hands clapped, sending Leake straight to the live final shows. All of the judges and Crews have now used their Golden Buzzers.

Cowell called his act an “amazing tribute.” He continued: “There is something very, very special about you. This is a very difficult thing for me to judge, I shouldn’t be judging it. I just want to compliment you on what you just did, because it was extraordinary.”

“America’s Got Talent” returns on NBC July 14 for the last audition show of the season.

Last week on ‘AGT’:Sofia Vergara falls in her haste to get away from shocking eye-bulging rapper

These actors made some passable lemonade out of some really bad lemons. We recently asked members of the BuzzFeed Community to tell us about actors who gave amazing performances in not-so-amazing movies, to the point […]

24 Questions I Had While Watching “The Craft”

A clueless singer, a space cowboy and a psychic mom

Accuser claims she had ‘suicide pact’

CLOSE Muliptle accusers of R. Kelly are speaking up about their experiences with…