Joe and Jill Biden proved they can speak from anywhere with their final interview of 2020 on “Dick Clark’s New Year’s Rockin’ Eve with Ryan Seacrest.”

That now includes speaking with their image broadcast from a giant Times Square Jumbotron, answering questions from a winter jacket-wearing Ryan Seacrest perched on the opposite end of the surreally deserted square.

While Andy Cohen and Anderson Cooper were throwing back tequila shots on CNN’s Times Square broadcast, Seacrest gave the introduction, “This is a first, joining us right now are President-Elect Joe Biden and Dr. Jill Biden.”

It wasn’t clear which part Seacrest meant by “first,” but the future leader of the free world taking questions over an empty Times Square was certainly novel, and odd.

But it’s (the end of) 2020. So after awkward hellos and stumbling congratulations, the Bidens got cooking and made it work. 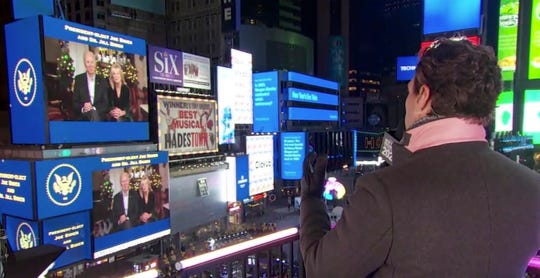 Seacrest had previously told USA TODAY, the interview would allow Joe Biden to honor the nation’s healthcare and frontline workers during the deadly pandemic. The few allowed to gather at the iconic New York destination were a collection of first responders, medical workers and their families.

Biden followed through with stirring phrases like “bravery resides in every heart and someday it will be summoned.”

“The people we are honoring tonight were summoned and they stepped up and they were brave. They have done so much. They risked their lives. We owe them,” said Biden. “They brought the country together. It’s a big deal.”

Jill Biden, not a fan of needles, discussed receiving the COVID-19 vaccine.

“You have to take it. And it doesn’t hurt. I promise,” she said. 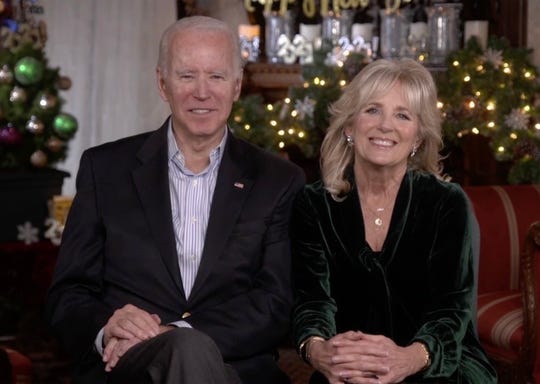 “She hates needles, so that’s saying something,” interrupted her husband.

“It doesn’t hurt and I didn’t have any after affects,” Jill Biden added. “Everybody has to take it, so that we all can be safe.”

Joe Biden then knocked out a softball question about the future of a country facing an out-of-control pandemic among other crises. He trotted the bases in the interview that aired minutes before the ball dropped on Times Square to welcome 2021.

“I’m more optimistic about America’s chances than I’ve ever been. And I’ve been around this for a while,” Biden said. “There’s never been a single thing that America has been unable able to overcome, no matter how drastic it’s been, when we have all worked together. And I’m absolutely positive we’re going to come back even stronger than we were before.”

Jill Biden ended the interview attempting to set off a party popper. Naturally, it made no noise, prompting laughter from the amused couple.

5 shows you should watch next from ‘Sanditon’ to ‘Jack’

CLOSE You may have never even heard of the best show on TV this year. USA TODAY TV Critic Kelly Lawler ranks her top 15. USA TODAY One of the only downsides of binge-watching Netflix’s […]

5 best TV shows and movies to watch with family

CLOSE It’s the most wonderful time of the year.  Christmas is here, and if…