Before Matt James was tapped for “The Bachelor,” Rachel Linsday was the only black person to hold a title role. She was “The Bachelorette” in 2017.

“The Bachelor” isn’t wasting any time.

It’s only Week 2, and we’re already witnessing major drama: a medical emergency, an ATV accident and early animosity among contestants.

Star Matt James is back to remind us that he’s never been in love, though he wants to be. Meanwhile, the contestants are in love with their new living quarters (La Quinta who?) – save for Victoria, who didn’t sign up for the show to be in a sorority house.

After eight women said their goodbyes last week, we’re still left with 24 contestants, which means not everyone will get dates with Matt this week. Let the battle for the Bachelor’s attention begin!

The first name called for a one-on-one this season is Bri, a 24-year-old communications manager from San Francisco, who joins the Bachelor for a muddy but fun all-terrain vehicle race. While things are getting physically messy with Matt, a proverbial mess is also brewing back at the hotel.

Victoria, this season’s resident “I’m not here to make friends” girl, starts to pick a fight with other women who said they were happy that Bri got the date card. How someone could be happy for another person who has something you want is beyond her, but don’t you dare suggest that means she’s jealous! The other women aren’t interested in drama this early, but Hurricane Victoria has already started spinning, and there’s no stopping her now.

We return to Matt and Bri, who board an ATV for a romantic couple’s ride – until the ATV topples onto its side, planting the two in a mud puddle. They’re fine (though their outfits are not) but Matt issues a special apology to Bri’s mom and says he’ll do a better job of protecting. 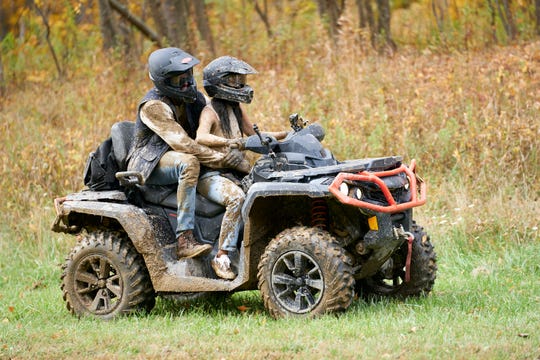 Already muddy, Matt and Bri mount an ATV before it topples over, depositing them into a mud puddle. (Photo: Craig Sjodin, ABC)

The next stop on their date is a hot tub in the woods – a “Bachelor” staple that feels like a welcome return to pre-pandemic dates, even if this one is still taking place within the quarantined resort grounds. Matt asks Bri if getting in the hot tub would be “cool,” she says yes, and we give Matt bonus points for asking for consent. He proposes a toast to near-death experiences and apologizes again, but Bri says she’s glad it brought them closer together. Cue the hot-tub makeout sesh.

During the dinner potion of their evening, Bri reveals that her mom was 13 when she became pregnant with her, and her dad wasn’t usually around. Matt can relate: his father was also largely absent. The two find common ground in looking forward to the opportunity to start their own families. It’s an easy rose for him to hand over.

Meanwhile, Victoria continues to pick fights, at one point dubbing her roommate Marylynn “psychologically disturbed” for reasons we don’t quite understand, and decides to sleep on the couch.

Group date: Attack of the Bridezillas

The first group date invite goes to Chelsea, Serena P., Abigail, Sydney, Illeana, Kristin, Lauren, Jessenia, Serena C., Kit, Kaili, MJ, Mari, Pieper, Rachael and Victoria, who join Matt at an outdoor photo shoot. What better way to picture a future together than to physically see what each woman would look like as his bride?

They run inside to try on wedding dresses. Obviously, Queen Victoria grabs a tiara. Wedding photo shoots with Matt ensue, but not all of the 16 women pretend to say “I do” before host Chris Harrison delivers a twist. 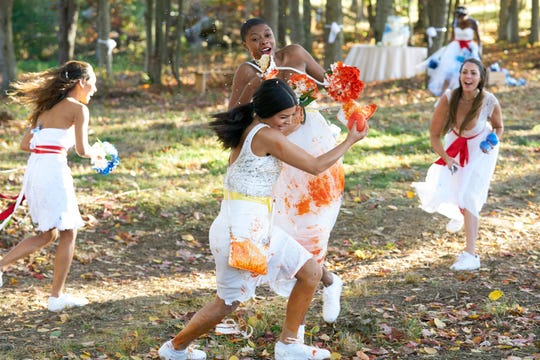 The next activity is a “Bachelor” version of Capture the Flag, in which two teams fight to steal the other team’s “heart,” landing a few NFL-worthy tackles and splattering each others’ pristine wedding gowns with rainbow-colored paint in the process.

MJ steals the gold team’s heart, securing a win for the red team, and Mari wins the Most Valuable Bride Award even though she was on the losing team, which means she gets to join the rest of the winners at an afterparty with Matt. The other losers say goodbye for the evening – a stressful thought for the women who still haven’t had the time to make a connection with him.

The remaining women spend the evening delving into their personal stories: Lauren wants to be with a man of faith. Jessenia has trust issues that stem from infidelity. Victoria had a hard time picking out her clothes this morning.

It’s Lauren who nabs the group-date rose. Matt says she blew him away during their brief meeting on the first night and is thankful they got more time.

Sarah, the 24-year-old broadcast journalist from San Diego, meets Matt for a flying date. She jokes it looks like they’re about to board the first plane ever invented.

All day, Sarah is worried about their conversation turning personal, because it’s difficult for her to talk about her family. Matt clearly has been briefed that there’s something to talk about because he keeps asking about her dad. But it isn’t until evening that she shares what viewers already know: she quit her job and moved home to serve as a caretaker for her father, who was diagnosed five years ago with amyotrophic lateral sclerosis (ALS), also known as Lou Gehrig’s disease. 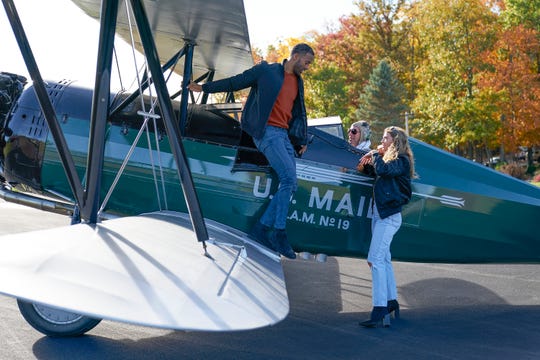 Pilot Pete, is that you? Matt and Sarah take to the skies for their one-on-one date. (Photo: Craig Sjodin, ABC)

Matt tells Sarah he’s “honored” she would spend time getting to know him, and asks what he can do to show he is worthy of her. (Um, this may be the best question a Bachelor has ever asked.) Sarah just wants him to be as real as possible – life won’t always be producer-orchestrated dates! That works for Matt, who gives her the date rose and a kiss before they move on to the second hot-tub scene of the week.

At the cocktail party, Matt marvels at how far his relationships with the contestants have come. In last-ditch efforts to make connections before the rose ceremony, women who didn’t get much time with him attempt to pique his interest.

Abigail, who nabbed the first-impression rose last week, says she struggles in groups, so she devises a secret signal with Matt so they can share a private moment in a public setting. Magi imagines making Ethiopian dinners for Matt.

Marylynn tears up, telling Matt she doesn’t know why she’s here because she hasn’t spent time with him yet. But Matt is prepared with her favorite flower, an orchid, for a grand gesture that lets Marylynn know he’s been thinking about her. She’s on Cloud 9, but it doesn’t last long.

Victoria deems it necessary to inform Matt about her “toxic” ex-roommate. She claims Marylynn cries to manipulate situations, and Matt apologizes for not welcoming her to share this information sooner. It’s a “she said, she said” situation at this point: Marylynn denies this, and Victoria insists she has done nothing wrong.

Matt heads into the rose ceremony knowing he needs to follow his gut, and begins to dole out roses to Pieper, Kit, Magi, Rachael, Abigail, Chelsea, Jessenia, Katie and Serena C.

He’s cut off by a dramatic incident in which Sarah nearly faints. Bri guides her off the risers and onto the floor while Matt rushes over. Sarah tells a medic she’s “blacking out” and “can’t see.”

That’s where the cliffhanger leaves us. But fear not, Sarah fans: she’s shown in a brief teaser for next week’s episode, suggesting she’s OK. Eliminations will have to wait until Episode 3.

I need a do-over of that finale. It’s been about four years since the TV show Castle came to an end after eight seasons. Vivian Zink / Walt Disney Television via Getty Anyone who loved […]

Executive producers of “The Ellen DeGeneres Show” are responding to …

5 shows you should watch next from ‘Sanditon’ to ‘Jack’

CLOSE You may have never even heard of the best show on TV this year. USA TODAY …