The Gremlin spared fellow contestants from elimination by unmasking himself.

Spoiler alert! The following contains spoilers from the Nov. 18 episode of “The Masked Singer,” including the identity of the unmasked celebrities.

Things are getting real. During the Group B finals on Wednesday’s “Masked Singer,” viewers had to say goodbye to not just one, but two stars in costume.

Seahorse, Crocodile, Whatchamacallit and Serpent left it all on the stage for a chance to join Sun and Popcorn (from Group A) in the Super Six.

In-house investigators Ken Jeong, Jenny McCarthy, Nicole Scherzinger and Robin Thicke were joined by guest panelist actress Cheryl Hines, who also appears on the panel of Fox’s “I Can See Your Voice,” which Jeong hosts.

Following this week’s performances, clues were delivered by former “Masked Singer” contestants who are in some way connected to the current challengers. 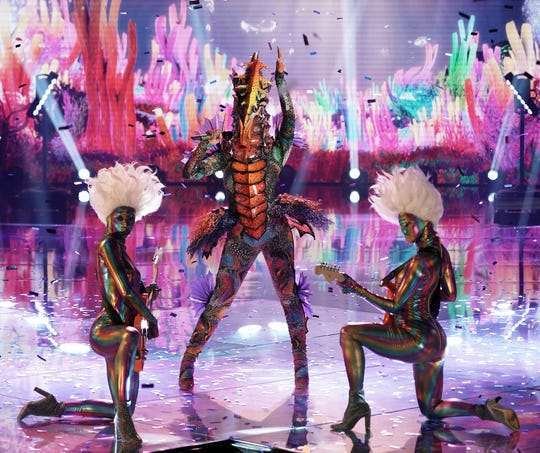 Will Seahorse sink or swim in the Group B Finals? (Photo: Michael Becker/FOX)

Clues: Tips to Seahorse’s identity were given by her spiritual adviser, who remembered his first meeting with the challenger, then a “girl next door with just a backpack and a guitar, ready to work.” Fried chicken in a container labeled Nashville, two baby dolls and a Christmas wreath were highlighted in the piece.

Seahorse tried to convince the panel to still believe in her singing capabilities, throwing it back with Britney Spears’ “…Baby One More Time.” The performance was spot on! Brit Brit, is it you under there? Seahorse killed it!

After Seahorse killed it, Astronaut (revealed to be Hunter Hayes in Season 3) appeared with a foam finger bearing script that divulged: “Seahorse was never in a girl group!” 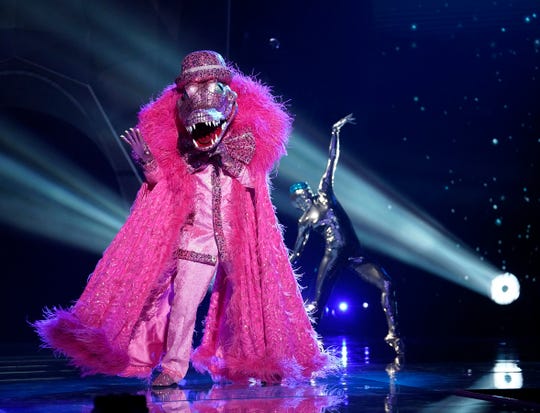 Clues: An “interviewer to the stars” dropped clues as to what celeb lay beneath Crocodile’s scales.

“We’ve been all around the world together,” Croc’s mystery friend revealed. “Once, we traveled to six continents in 100 hours.” Video games, a house of cards and a toy boat were also showcased in the package.

Following Croc’s rendition of Leona Lewis’ “Bleeding Love,” Bee, the costume of legend Gladys Knight, who competed during the series’ premiere season, entered the stage to reveal: “Croc was in a huge cult classic movie!” 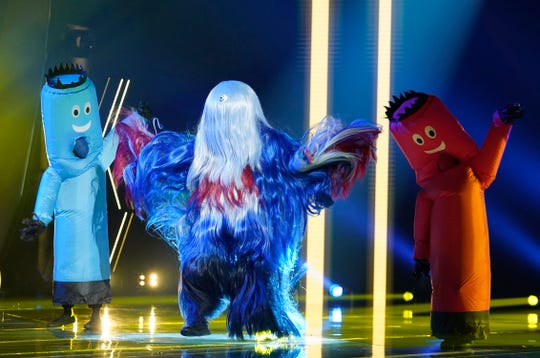 Whatchamacallit wants to “lean back, lean back” into the Super Six. (Photo: Michael Becker/FOX)

Clues: Whatchamacallit introduced his high school teacher/mentor, who shared the star avoided mischief. “He had a good head on his shoulders, very focused and hard-working, but he could still surprise you,” said Whatchamacallit’s acquaintance. Also, there seems to be significance to a coffee pot, a crown and ping pong paddles and balls.

Whatchamacallit tried to get his audience to “Lean Back,” performing the hit by Terror Squad, featuring Fat Joe and Remy Ma. After getting people to do “the rockaway,” Whatchamacallit was joined by Ice Cream, embodied by YouTube gamer Tyler “Ninja” Blevins during Season 2. Ice Cream held up a piece of sash that revealed, “Whatcha’s already won a championship.”

Guesses: Jeong thought he had a slam dunk with his guess, NBA player Lonzo Ball. Scherzinger also tried to make nothing but net with Carmelo Anthony of the Portland Trail Blazers. Hines bet on her “Curb Your Enthusiasm” co-star J.B. Smoove. 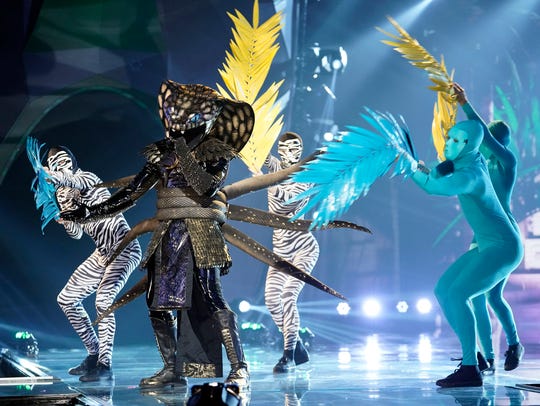 Will the votes strike Serpent down in the competition? (Photo: Michael Becker/FOX)

Clues: Serpent’s college roommate explained it hasn’t been an easy road for “The Masked Singer” player. “He suffered through a million setbacks, but I remember the day when suddenly everything changed,” the roommate said. “It was like God finally flipped the light switch. Serpent wasn’t looking for fame. Fame found him.”

Speaking of switches, we’re definitely in need of a light bulb moment to figure out what jars of mayonnaise and peanut butter and the sunflowers mean.

Serpent showed off a gravelly voice, crooning “Cool” by the Jonas Brothers. Then Eagle, Dr. Drew Pinsky’s costume from Season 2, delivered a clue: “Serpent has sung with one of you before!”

Seahorse sailed safely into the Super Six, and Whatchamacallit was the first to be eliminated.

Jeong originally suspected the axed contestant to be basketball player Damian Lillard, but swapped it for his guess from earlier in the night, Ball. Thicke’s first instinct? Rapper Tyler, the Creator, which he traded for TV personality Michael Strahan. McCarthy initially thought of “Black Panther” actor Winston Duke but ended up going with basketball player Devin Booker. Scherzinger’s first guess of “Uncle It” brought laughs. She rejected that instinct for Anthony, her guess from earlier. Similarly, Hines stuck with her earlier guess, her co-star, Smoove.

The true identity of Whatchamacallit was revealed to be Lonzo Ball, sending rarely right Jeong into fits.

Speaking to his motivation for joining the show, he said: “I love music, I love performing, so this kind of brought it all together. And I knew my mom watches this so it’s going to definitely put a smile on her face when she sees me.”

Serpent was revealed to be the next contestant struck, leaving Crocodile to join the Super Six.

The slithering and singing celebrity beneath the Serpent costume was Dr. Elvis.

When Serpent reflected on his time on the show, the world “unbelievable” came to mind.

“It’s a once-in-a-lifetime kind of situation, very different from what I do on a day-to-day basis,” he said, “but something I’ll never forget for the rest of my life.”

Jeong was moved to tears. “Your version of ‘Imagine’ got us through the pandemic, man. … This guy is smarter than any doctor on the planet, and there’s just truly no one more talented than him. And I’m crying because I’m jealous because you’re more talented than me. But I just want you to know, man, you just got us through a very difficult time, and we love you so much.”

Episodes of “The Masked Singer” can be watched on Fox’s website.

‘The Bachelorette’ recap: Ed, Chasen clash – but Noah (and his mustache) may be the season’s true villain

Why Penn Badgley feels more ‘myself’ since playing Joe

After binge-watching episodes of “You,” the frothy thriller that stars Penn Badgley as Joe, a charming sociopath, it’s hard to get his intense baritone voice that narrates the series out of your head. You hear him assessing […]

After outcry and viral petition, 'Charlie Brown Thanksgiving' and 'Christmas' specials get airing on PBS

Apple TV+, responding to protest after moving the beloved Peanuts holiday specials to the streaming service, now will allow a single broadcast on PBS.         Sahred From Source link TV and Movies

More like Cinder-meh-la, am I right? 17. Snow White and the Seven Dwarfs (1938) Disney Snow White is at the end of the list because, honestly, she’s one of the more bland Disney princesses. Her […]

Here’s who advanced to semifinals

When you look at it this way, were these villains really in the wrong? Although,…