Before Matt James was tapped for “The Bachelor,” Rachel Linsday was the only black person to hold a title role. She was “The Bachelorette” in 2017.

This week’s “The Bachelorette” is the best episode of “The Bachelor” franchise in recent memory. It thoughtfully tackles current events – the Black Lives Matter movement and the ongoing coronavirus pandemic – yet also manages to tell blossoming love stories with the usual humor and petty drama mixed in. Leave it to “The Bachelorette” to pull out all the stops when our normal world has been on pause.

The episode begins with a group date for Bennett, Ivan, Blake, Riley, Demar, Kenny and Zac, who must compete for a one-on-one date with Tayshia. Their challenge: Write an original love song and perform it for her.

The men receive journals and can choose musical instruments for accompaniment – not that many of them are particularly talented. Blake tries to play the accordion, for example, and what looks like a mandolin.

They otherwise mostly stick to off-key singing, spoken-word poetry and rapping. Bennett, who did not take any music classes at Harvard, admits he “spit some flow” in high school. Uh, sure. 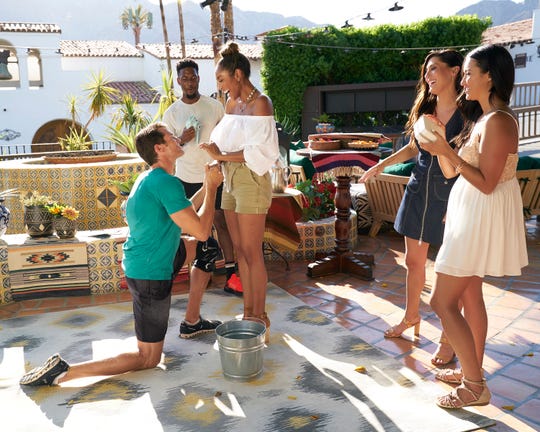 Former Bachelorette Becca Kufrin and Sydney Lotuaco from Season 23 of “The Bachelor” visit Tayshia, helping her plan an outrageous game of Truth or Dare for six of the men. (Photo: Craig Sjodin, ABC)

Ivan invites Tayshia up while he raps for her in a sweet and intimate moment. Demar impresses on the guitar and sneaks in some shade to Tayshia’s former “Bachelor in Paradise” flame John Paul Jones.

Tayshia picks Ivan as the winner – and we can’t blame her. “I would love for you to meet me at my suite tonight,” she says.

The date starts off innocent enough. The pair decide to order room service and play The Floor Is Lava by hopping on furniture and cushions to get to the phone. Tayshia starts a pillow fight, covering the couple (and the room) in feathers. They also play Twister; it feels like what a couple would do to pass the time during quarantine.

He says she’s “bringing out the best” in him and the pair kiss. Tayshia says in an aside she feels like that’s what relationships are all about.

We learn a lot about Ivan tonight: He is Filipino and Black, another thing for them to connect on as Tayshia is also biracial.

He opens up about his younger brother experimenting with drinking and drugs after Ivan left for college, though Ivan had been trying to set a good example. His brother wound up in prison for years; Ivan tears up talking about that and his love for his niece.

“I don’t pass judgment on anybody,” Ivan says, reflecting on what his brother’s experience taught him.

His brother was released last year, but Ivan learned about corrections officers beating him up. The conversation dovetails into one about the pandemic and George Floyd, the Black man who died after a white police officer knelt on his neck. His death prompted the national reckoning on racism and police brutality this summer.

Tayshia talks about how hard she had it growing up trying to blend in among peers who didn’t look like her. Hearing people yell “Black lives matter” really hit Tayshia. Ivan recalls getting called the “N” word all the time in college.

We bet you saw this coming: Tayshia gives him the rose; she feels like she can open to him about anything, and appreciates his vulnerability.

Elsewhere: The men who failed to get the one-on-one receive another date card. “How far are you willing to go for love?” it asks. Bennett and Noah clash after Noah expresses wanting more time with Tayshia even after he got a group date rose. Boo, Noah, boo.

Last week: ‘The Bachelorette’ recap: Ed, Chasen clash – but Noah (and his mustache) may be the season’s true villain

Becca Kufrin, a previous “Bachelorette,” and former “Bachelor” contestant Sydney Lotuaco help Tayshia send the men on the group date off on a game of Truth or Dare? – with a twist. Basically, all the dares come first, and you can’t choose truth.

The men pair up and have to do dares all over the property. This includes drinking smoothies with gross ingredients like cow intestines; getting Chris Harrison to sign a part of their body “where the sun doesn’t shine”; and giving their best orgasm noise over a hotel phone (which can be heard across the resort). That last one had us howling with laughter – and turning down the volume, because we have roommates and are respectful.

Another dare: They must eat a habanero pepper then propose to Tayshia. “The Bachelorette” team was not playing around this week, folks.

Later, Tayshia starts asking the men some truths. For Blake: What would an ex warn her about him? Blake says he has good relationships with all his exes. Nobody does, Blake, we’re on to you.

Tayshia asks Zac what scares him about marriage, and he says that life shows up and there are struggles but it’s how you work as a team to get through those things. He needs someone to be his rock. The conversation feels a little forced (and heavily edited), but whatever. They make out and seem happy.

Bennett, meanwhile, is starting to see real possibility in this “Bachelorette” experience; it got real for him when he fake-proposed after eating the pepper.

The rose goes to … Zac! Chemistry for the win.

Ben needs to make it up to Tayshia after failing to secure time with her last week. He decides to pay her a late-night visit … but so does Ed! We see both men individually en route to Tayshia’s suite. Will they show up at the same time?!

Not exactly. Ed winds up at Harrison’s door by “mistake.” (We put this in quotation marks because this feels … a little too producer-driven.) The pair have drinks and hang out.

Ben makes it to Tayshia and apologizes. She says she’ll forgive him, because she can tell he means it. They kiss.

Room service shows up, and the two share champagne; Ben’s nightcap plan pans out after all. We were more for Ben last week; this week, Ivan drew us in more.

In case you missed: ‘The Bachelorette’ recap: Tayshia’s takeover comes with a few twists – including more men

Who gets a rose? But first, some more drama

The cocktail party begins – and Ben grabs Tayshia first. The rest of the guys don’t know about the late-night visit. “He looks at me like I’m the only person in the world,” she says. OK, and now we’re smitten again.

Noah cements his status as the season’s villain. He tells Tayshia that the men have been rolling their eyes about Tayshia giving him a rose after he crashed the wrestling group date, and that people think she gave it for show. Tayshia does not react well to people questioning her integrity.

She calls all the men together and and says her integrity has been called into question and that she’s been accused of giving roses to start drama in the house. She defends herself. “I’m a grown woman, and I can make decisions based off of what I want to do, and if you’re going to be questioning me, I’ll gladly walk you outside,” she says.

With that, the cocktail party abruptly ends. Stunned, the men want to know what’s up. Noah explains he told Tayshia that some men think she gave him the rose just for show. Arguing ensues – not a shock. “You owe all of these gentlemen and her an apology,” Bennett says.

The rose ceremony finally arrives. Remember: Noah, Ivan and Zac already have them.

“I don’t want to be the villain of this, but I’m not changing. If anything, I’m going to take it up a notch” Noah says. Well then.

Please and thank you: Need some romance? ‘The Bachelor’ mansion is now available on Airbnb for $6,000 a night

Actors Over 90 Who Gave Amazing Performances

1. Norman Lloyd, who was a couple of months shy of 100 when he filmed 2015’s hit Trainwreck. Universal Norman was memorable as a cranky character who lived at an assisted living facility with the […]

Edie Falco on her new CBS drama ‘Tommy,’ and reliving ‘The Sopranos’